Liz Schulte: Taking your self-publishing career to the next level

“I never wanted to be a writer,” Schulte began on October 7th, 2017. “I thought, 'I don't want to jump through hoops to find an agent or publisher, but if I could take control of this ship, I would.'” Liz Schulte has written and self-published over 26 novels since 2012. Going from a $2,000 loss at the start to surpassing her work income and making independent publishing her full time job. It took a lot of hard work and experience, some of which she had time to share with the St. Louis Writer's Guild, including how to manage time, find readers, and strategize marketing. 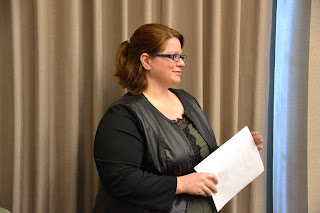 Step 1 is always putting words to the page. Schulte has a goal of 2,500 to 3,000 words a day. “Some days it's harder than others,” she said. “One book a year doesn't count. You need to be publishing constantly. It doesn't matter how many words you write in a day as long as you write. Even at 50 words a day you will finish your book.” Quality is not sacrificed for speed. Schulte does two to three drafts per book and hires an editor to make sure the final draft is top-notch. Although, she's tried all sorts of methods of plotting, experience has taught her to follow her characters and plot a couple chapters at a time. When she encounters writer's block, she turns to flash fiction. “I find a sentence or a prompt or picture and set a timer and write a little fiction about it and that gets me writing and then the words are there and I write.”

Schulte writes paranormal romance, mystery, and fantasy. She recommends writers who are writing series to write all entries in the series at once so that they can be released together. Readers want a complete series, and it allows the first book to be reduced to free as a marketing strategy to catch new readers. Free books distributed through sites like Smashwords and Instafreebee are one of many strategies for broadening an audience.

Another path to readers is through social media websites like facebook, instagram, snapchat, and twitter. “Social media is not the be all and end all,” Schulte said. “People can pick up when you don't want to be there. When you go on social media, be prepared to be their friend.” Readers want to know about the authors they read, and sharing about personal topics can help foster a community among writers and their readers. “I like to talk about my dogs, scary movies, and Jane Austin because that's what I like,” Schulte shared as an example, “and readers tend to have a lot in common with me because they like my books.” She also leads an online fan book club that has grown to four-hundred members. Schulte also fields her readers for ideas, often in the form of contests. One of her series has a clever motif for titles, so she invited her readers to suggest options in exchange for prizes like early access to books or naming a character. “We have fun,” she said. “It's a community. And forming that community is very important.”

Advertising is another way to attract new readers. Plastering ads on social media is not a good strategy. “Social media is a great place to build community, but not all readers want to talk to the authors they read,” Schulte said. Ads through portals like Bookbub can reach lots of readers at once, but can be very expensive. For this reason, advertisements and promotions like free book giveaways are best utilized by authors with many books under their belt, so that new readers have a wide library to sample from when they click through. New authors with only a couple books should instead focus on community and building a newsletter list.

Every writer should start building an email list for newsletters. “Open rates aren't extremely great,” Schulte admitted, “but if you build the list naturally you'll have a much better read and click-through rate.” She has one newsletter for all readers regardless of genre, and pushes announcements about all new releases. In 2016 she used this newsletter to construct a street team. She selected ten members to receive a gift bag and a copy of her newest book in advance. In exchange the street team was asked to give feedback on social media and reviews of the book when it came out. “I wanted real readers, not people who wanted something for free,” Schulte said. “Authors complain that 'my street team isn't leaving me reviews.' Life happens. You aren't paying them. Always treat your street team and your readers with a lot of respect.” 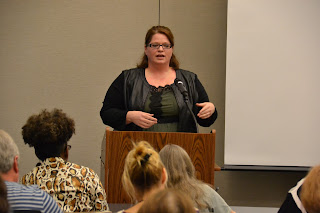 Listings on sites like Amazon and Goodreads are also important. The book cover is the first impression a reader has of book. It needs to tell a story and communicate to readers the tone and genre they are going to find in the book. “Know what your genre look like and who the successful authors in your genre are. See what their covers look like,” Schulte said. “If they're selling they're selling for a reason.” Schutle employs many different cover artists and designers to help tailor her books to the proper audiences. An illustrated cover is a great fit for one genre and not another, so although Schulte's wide range of books are promoted in the same newsletter and on the same media streams, they'll still appeal to the audience she is targeting.

The blurb on the book listing is just as important and Schulte had a list of helpful tips to help craft the perfect blurb: 


Making a career out of writing is not easy, but far from impossible. “I had to treat it like a business,” Schulte said. “Plan for writing like you're going to be successful. Start your LLC early. Get everything in line. I just want to make a living. I just set goals.”

If guild members would like to hear more wisdom from Schulte's career in independent publishing, they are welcome to a complimentary nineteen-page supplemental handout. [Email information redacted for privacy of author -- guild members, please contact news@stlwritersguild.org for contact details.]
Posted by Unknown at 6:19 PM